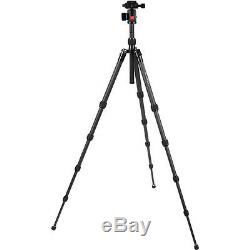 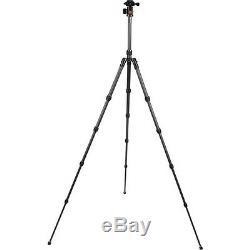 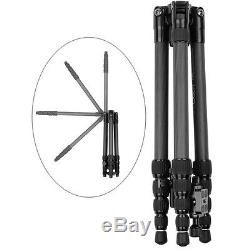 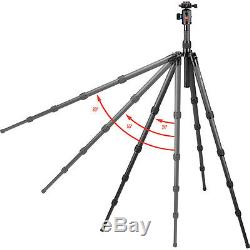 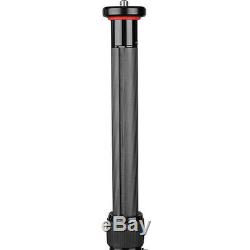 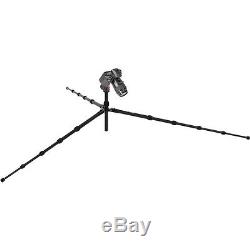 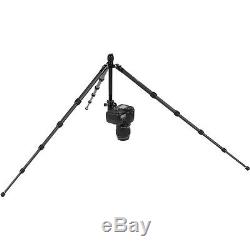 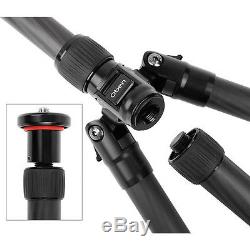 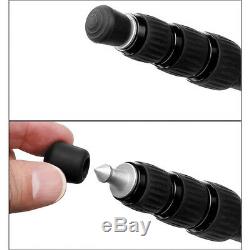 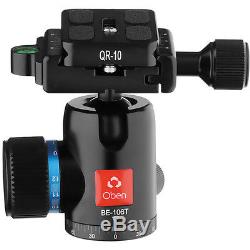 CT-3521 Carbon Fiber Tripod with BE-106T Ball Head. Is a sturdy yet lightweight tripod with 5-section legs that fold upward 180° to create an extremely compact package for transport with the included head attached, folded length is only 14.8.

For further versatility, one of the legs unscrews from the chassis and attaches to the head & center column to form a working-height monopod. With a system load capacity of 6.6 lb, the tripod and head ensure a stable base for many DSLR body/lens combinations. With the five leg sections and the center column extended, the maximum height of the tripod with the head is 56.4.

The legs are non-rotating, which enables single-handed operation of the rubber twist locks on each leg: One twist of the wrist, and the four leg stages descend. Each leg is independently adjustable, and they can be locked securely at three different angles. The tripod's feet feature rubber tips that can be removed to reveal metal spikes, allowing you to shoot both indoors and outdoors on any terrain. To shoot in monopod mode, simply unscrew the leg that forms the base of the monopod, remove the center column from the chassis, and screw these two elements together. With the head & center column mounted on the extended leg, you have a full size monopod that's even taller than the tripod at full height.

Like the legs, the center column features a twist lock that frees up its extension and retraction. For protection when it's retracted quickly, there's a rubber damper that protects the center-post collar. At the bottom of the center column is a spring-loaded ballast hook that allows you to attach a counterweight for extra stability. The detachable hook doubles as a stopper for the center column, which can be removed and reversed for low-angle shooting.

The BE-106T head features one locking knob for the ball and a separate knob to control the 360° panning. This enables fast setup changes, and frees you to keep a finger on the shot trigger while you're making a quick adjustment to the head's orientation. The head has a 90° notch which facilitates shooting in portrait orientation. Two bull's eye bubble levels ensure your camera is level on both the horizontal and vertical axes. The included Arca-type quick-release plate attaches to your camera via its standard 1/4-20 screw. The quick-release plate has two safety screws to prevent the camera from accidentally being released when adjusting the plate fore and aft.

This tripod also includes a fitted, padded carry case with a removable shoulder strap, two heavy-duty zippers, and an interior zipper pocket. A tool clip with two hex wrenches for adjusting the center column and the leg joints is also included. It snaps onto any of the tripod legs for easy access. The legs fold up 180° so that the ball head is concealed between them.

This reduces the overall height of the folded tripod. The long section of the column can be removed, so that the head and short column section can be attached directly to the chassis. The legs are independently adjustable to 3 leg angles: 24, 55, and 80°. 6.6 lb (3.0 kg).